We noticed this NPR article on the standard International Symbol of Accessibility. We’ve been making an active version of the ISA for years:

The handicapped sign is getting a new look — at least in New York City.

The initial design, created in 1968, depicted a person with no head in a wheelchair. The sign has changed since then — the figure eventually got a head — and now it’s trying something new.

This new handicapped sign will appear in New York City this summer.

Sara Hendren, a Harvard graduate design student, is co-creator of a guerrilla street art project that replaces the old sign with something more active.

“You’ll notice in the old international symbol of access, the posture of the figure is unnaturally erect in the chair,” she says. “There’s something very mechanical about that.”

Hendren’s new design looks more like a person wheeling him or herself independently. “Ours is also leaning forward in the chair. There’s a clear sense of movement, self-navigation through the world,” she says.

It might not seem like much of a difference, but it was enough to fire up a young man with cerebral palsy named Brendon Hildreth, who uses a wheelchair. He and Hendren met as the project gained momentum, and the North Carolina 22-year-old adopted the icon as his own.

Hendren says Hildreth has become a kind of one-man machine around this symbol. He’s made t-shirts with his family and has invited local businesses and institutions to change their signage.

Hildreth can only speak through a machine that he types into, and people have looked at him differently all his life.

“He’s someone who has been treated as though he had less of a complex and interesting life and wishes for his future,” Hendren says. 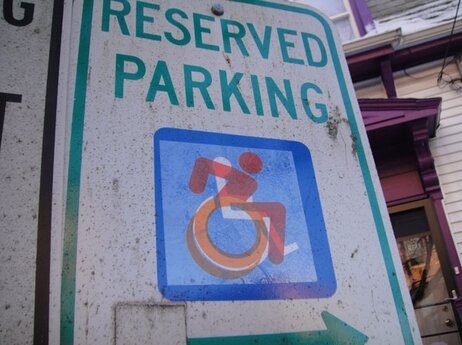 In the beginning of their project, Sara Hendren and Brian Glenney stuck their new design over existing handicapped signs around Boston.

That misperception is what drew Hendren and her partner, Brian Glenney, to start this project. It helped that Glenney, an assistant professor at Gordon College in Massachusetts, is also somewhat of a graffiti artist on the side.

“He said, ‘Well, why don’t we do something?’ He was used to kind of altering public property,” Hendren says.

They went all over Boston, putting stickers of the new symbol over with the symbol we’re all familiar with.

People began to notice, in part because what Hendren and Glenney were doing — defacing public property — is technically illegal.

“That’s true, but we were glad we did, because we raised some conversation,” Hendren says.

The response was so strong that they ended up sending stickers to people around the country. It took just one cold call to to reach Victor Calise, New York City’s commissioner for people with disabilities, and convince him to join the cause. This summer, the old symbol will be replaced with the new one in all five boroughs.

The Power Of Symbols

But for all the successes, the project still has its critics.

“We’ve certainly had people who say, ‘It’s just an image, and I’d rather you spend your time lobbying for other kinds of concrete changes,’ ” Hendren says.

But she sees the new, more active symbol as an opportunity to open the conversation and change people’s perceptions.

“An icon, an image, a symbol, can be a really powerful kind of seed for much larger efforts,” Hendren says.